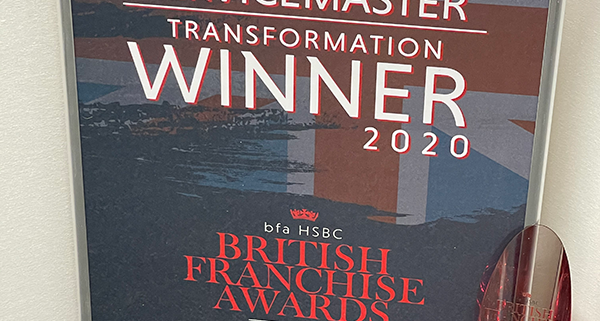 Siva now owns 5 licences within our office cleaning network and has plans for further expansion in the future.

Siva commented on winning the award:

“I feel incredibly proud to be recognised as a winner in the BFA Awards. To me, they are the pinnacle of franchise industry awards and winning is the ultimate achievement. I always strive to be the best in what I do and a BFA award is the validation of this.”

The awards are the flagship event in the franchising calendar, with nominees and winners, proving the business works ethically and in the best interests of franchisees and staff. This year the awards were postponed and held virtually, as the safety of everyone involved was of very high importance.

“In little more than three years, Siva has taken an existing franchise unit and increased its turnover tenfold.

This is a fantastic achievement and it has also benefited people in the community as he has gone from hiring one supervisor to one office manager, one operations manager, three area managers, one sales executive and seven mobile cleaners.”

There are more franchise systems than ever before, showing that businesses are choosing franchising as an ideal model for them. The fact Service Master managed to win this accolade, when so many new companies are entering into franchising, is a testament to the company’s values and culture.”

“From the offset, Siva was determined to double the size of his business in 18 months and this has paid off.

It was fantastic to hear from the Franchisee Transformation finalists and learn about their journey into franchising. Service Master impressed the judges with its passion and devotion to customer service and maintaining relationships with the existing client base.

It’s been a difficult year for all businesses, so we are pleased to see members of the franchise community thriving, having adapted to operate successfully despite the difficulties thrown their way.”

Siva was helped by members of the marketing and operational teams with his entry and managed to stave off competition from three other shortlisted companies to claim the prize.

If you’d like to join an award winning franchise network, contact our team today on 0116 275 9005 to discuss available territories