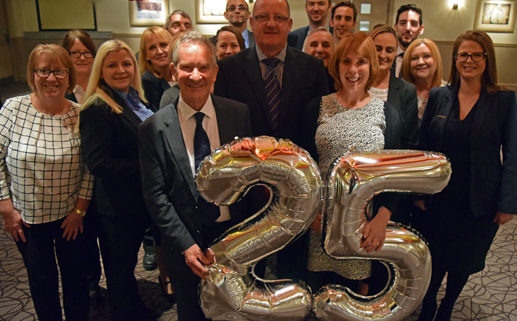 An award-winning cleaning company based in Sale, Manchester is celebrating 25 years of bringing a shine to its customers across the city and surrounding areas.

ServiceMaster Clean Contract Services (CS) Manchester was launched from the conservatory of business owners, Martin and Sarah Steinman on 1st January 1992 and now employs over 300 staff with a turnover of more than £2.8m. To celebrate the milestone, the company held an event at which CS Manchester’s managing director, Guy Johnson announced the company saw an 8% increase in revenue last year on 2015 and set out the company’s growth plans to double its turnover and headcount by 2022.

Martin Steinman, business owner said: “It is a privilege to work with such a fantastic team and to have achieved this milestone anniversary together. We are very much looking to the future and our extensive growth plans.”

Guy Johnson, managing director added: “I feel immensely proud of how far this business has come. We have continued to grow year-on-year and we’ve consistently invested in new technology and systems to allow us to work smarter, quicker and ultimately, provide our customers with the best experience they can expect.”

CS Manchester is a franchise of ServiceMaster Limited, one of the UK’s largest and longest-established, multi-brand franchisors.

Guy Strang, brand operations manager for the ServiceMaster Clean Contract Services franchise network commented: “There aren’t many businesses that launched back in 1992 that continue to grow year-on-year at the rate of CS Manchester. The team is focused and determined to achieve great things, whilst putting their customers at the centre of everything they do. Congratulations to Martin and Sarah and all the team.”

Over its 25 year history, CS Manchester has been awarded four franchising awards, including the British Franchise Association Franchisee of the Year Excellence Award in 1995.