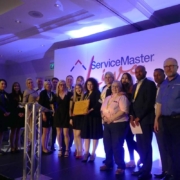 ‘ServiceMaster Live!’, which took place this May, was a gathering of franchisees from across the ServiceMaster Ltd brand family. Franchisees from each network came together to learn from one another and celebrate each other’s successes in an awards ceremony at the end of the day. ServiceMaster Clean Contract Services AAA owner Siva Kugathas and his team took home multiple awards in recognition of their hard work in overall customer service, sales, marketing efforts, resilience in the face of hardships, charity and community work and more. 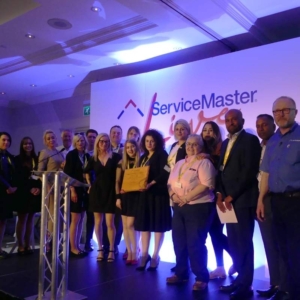 Siva is no stranger to awards, having won multiple awards for growth and business since starting his journey with ServiceMaster Clean Contract Services back in 2017.

When he purchased ServiceMaster Clean Guildford 5 years ago, Siva saw it as an ideal opportunity to take the established business to the next level. And he certainly has, winning a string of very notable awards including for Business Person of the Year and even becoming one of the first-ever Great British Franchisee of the Year winners back in June 2021. Siva has now added to this list of accolades the ServiceMaster Marion E Wade Award for Franchisee of the Year.

The most prestigious award presented at ServiceMaster Live, franchisee of the year is the pinnacle of achievement for a franchisee in ServiceMaster Brands UK. For Guy Strang, ServiceMaster Clean Contract Services Brand Leader and Marketing Manager Victoria Tayler, Siva was the obvious choice for such a coveted award. He has grown his business by a substantial amount during his time as owner, both financially and literally, adding a large number of staff members to his award-winning team and 12 additional territories since 2017.

Part of what makes Siva so effective in this regard is his ability to build and maintain strong relationships, both with customers and with his staff. Even as he was finding his feet when first taking over his business, Siva knew the importance of maintaining and improving relationships with the existing client base. As a result, he arranged face-to-face meetings with each customer which not only allowed him to introduce himself and put a name to a face with all of his brand-new customers. Then, having established a good foundation with the existing client base, Siva set out to improve the already great levels of satisfaction with the implementation of a monthly NPS ‘Tell ServiceMaster’ as well as on-site customer feedback forms which allow him to see where he needs to improve.

Although confident in his operations ability, Siva felt that his lack of background in sales might be his greatest challenge. But as part of a franchise business, he was well-prepared to combat this. He had the marketing information and support from the training academy that he undertook upon purchasing his business, which we carry out with every new business owner to acquaint them with the processes that they need to run a successful franchise business. And he also had the help of the ServiceMaster head office marketing team behind him, who helped him set out a plan to overcome this potential hurdle. Siva knew that to facilitate sustained growth for his business, his plan needed to be robust. So, alongside our central marketing team, Siva initiated several marketing activities including:

Siva said of this process that he “thought ops would be [his] strength and [that he] would struggle with sales.” But “sales is addictive, I get so excited when I get a deal, and I just want more,” he says. The changes that Siva made, driven by his passion for sales and drive to innovate resulted in strong growth for CS Guildford. So much so, that at ServiceMaster Live, Siva and his team received two North Star Growth awards for growth of £1 million in a year and 2 million in five years.

Siva says that he was “delighted and proud” to win multiple awards whilst surrounded by his team and peers at ServiceMaster Live. Primarily though, he says would like to thank his team, to whom he attributes his success, and says he plans to “Increase [his] focus on growth by carrying out more marketing activities as well as increasing the brand presence within [his] region.”

“Wow, Siva has won several growth awards, a customer award, people awards, a marketing award and most prestigiously the Franchisee of the Year Award and I am not surprised at all,” added Victoria Tayler, ServiceMaster Clean Contract Services Marketing Manager.

“Since I have known and worked with Siva, he has always worked incredibly hard to grow an outstanding commercial cleaning business, he 100% believes in his staff and they in turn 100% believe in him, this makes for an exceptional business, an exceptional team and exceptional customer service that deservedly goes from strength to strength and I am sure there is more to come.”

If, like Siva, you would like to achieve strong growth in a highly profitable and rewarding business within the ever-expanding cleaning industry, get in touch with our friendly franchise sales team by calling 0116 275 9005 or email franchisesales@servicemaster.co.uk to enquire about available territories near you today.